Healing properties of Amethyst, mental, physical and spiritual from the New Age and Medical Science.

The top layer of the 17 layers of the Amethyst Biomat are Amethyst crystals ground 7 times. Gemstone therapists say that the amethyst has a sobering and cleansing effect. Amethyst has also been said to quell excessive stomach acid and, according to Hildegard von Bingen, served to combat insect bites and beautify the skin. But the amethyst not only had a firm niche in medicine; it was also esteemed as a stone of friendship. And since it was thought to put the wearer in a chaste frame of mind and symbolise trust and piety, the amethyst came to occupy a very prominent position in the ornaments of the Catholic clergy over the centuries.

In popular belief, the amethyst offers protection against drunkenness - for the Greek words 'amethystos' mean 'not intoxicated' in translation. Amethyst is a well known mineral and gemstone. It is the purple variety of the mineral Quartz, and its most valuable and prized variety. 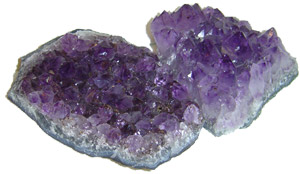 Crystal healing is an alternative medical technique in which crystals and other stones are used to cure ailments and protect against disease. Proponents of this technique believe that crystals act as conduits for healing allowing positive, healing energy to flow into the body as negative, disease-causing energy flows out.

But despite the fact that crystal healing has seen an upsurge in popularity in recent years, this alternative treatment is not popular with most medical doctors and scientists, many of whom refer to crystal healing as a pseudoscience. Scientifically speaking, there is no evidence that crystal healing can be used to cure diseases, because diseases have never been found to be the result of a so-called energy flow in the body. Furthermore, no scientific studies have shown that crystals and gems can be differentiated by chemical composition or color to treat a particular ailment.

The philosophy of modern crystal healing is based on traditional concepts borrowed from Asian cultures, most notably the Chinese concept of life-energy (chi or qi) and the Hindu or Buddhist concept of chakras, which are vortices of this life-energy, said to connect the physical and supernatural elements of the body. Some medical doctors tolerate crystal healing to a limited degree, seeing it as a therapy that can induce relaxation, which ultimately is therapeutic for stress management. Those seeking a crystal healer, however, should be careful not to forgo legitimate treatment for life-threatening disease.